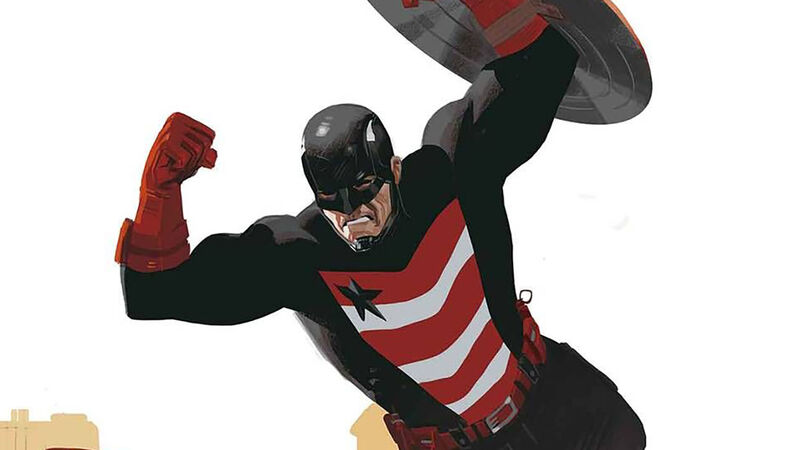 Thanks to a few The Falcon And The Winter Soldier set photos floating around the internet of a man who is most definitely not Steve Rogers wearing a very Captain America-type costume, the Marvel Cinematic Universe-loving public at large has one simple question on their minds: Who is John Walker, AKA U.S. Agent, and how might he play into the upcoming Disney+ series?

Played by Wyatt Russell in the series, the character began as “Super-Patriot” in the comics and then took over for Captain America for a time before becoming U.S. Agent. Here’s a look at his comic book roots and how those tendrils might make waves for Bucky Barnes and Sam Wilson on the small screen and the MCU beyond.

Hailing from Custer’s Cove, Georgia, John Walker grew up on a farm where he idolized his older brother Mike, a soldier who died serving overseas. Walker joined the service himself, but didn’t do much with his time there. Once again living life as a civilian, John got his physicality enhanced to super-human levels by Dr. Malus (a character we met in live-action in Jessica Jones’ second season) and the Power Broker, but still needed to pay for the procedure. He initially turned to wrestling until an agent named Ethan Thurm plucked him from obscurity and tried to make Walker’s new alter ego, Super-Patriot, a cultural icon and beloved hero, even if that meant ignoring people in trouble and focusing on fame over everything else.

When he made his debut in 1986’s Captain America #323, John Walker had already become Super-Patriot and was more concerned with making a name for himself then defending the defenseless. During a very public rally, he stood in front of a huge American flag and falsely claiming his powers were granted to him by God, while mocking Captain America’s advanced age. To top off the dog and pony show, he even bested some attackers calling themselves the Buckies who had actually been paid to be there by Super-Patriot’s backers, a ruse that Cap easily spotted.

In the historic Captain America #332, Steve Rogers resigned as the Sentinel of Liberty because he did not agree with the Commission, a government organization that proclaimed they legally owned the Captain America identity and wished to control Rogers’ actions. With that, they found themselves with a costume to fill and a shield to wield after both were surrendered by Rogers, and found their new Captain America in the form of John Walker. The Commission then hired Taskmaster to train Walker so that he could properly mimic Cap’s traditional fighting style and shield-slinging tactics. They also partnered him with one of his pals, Lemar Hoskins, who initially went by Bucky before switching to Battlestar.

During his time as Captain America, John found himself tasked with stopping the hate group known as the Watchdogs in the south. Though he complied, he also struggled with how many of his own views coincided with theirs. Down the line, after his secret identity was revealed, the Watchdogs found his parents and threatened to kill them if Walker didn’t show up. He, of course, did, but his parents died during the ensuing battle. Part of John snapped that day and he continued talking to them as if they were alive, even as he held their corpses.

That was the beginning of the end of Walker’s time as Captain America as he continued a downward spiral that sent him into a disastrous confrontation with Flag-Smasher. The villain would have killed John had Steve Rogers — then going by The Captain — and Battlestar not shown up to save him. After the Red Skull orchestrated a fight between Rogers and Walker, the Commission decided to strip Walker of the uniform and John himself convinced Steve to put it back on.

Walker would not fade into obscurity, though. The Commission publicly staged his assassination, but he was still very much alive. They secretly used hypnosis to alter his memories about what happened to his parents and gave him Steve Rogers’ The Captain red, white and black costume and renamed him U.S. Agent. He also received a new secret identity — Jack Daniels — and the vibranium shield that Black Panther had gifted Rogers during his time as The Captain. Eventually, John found out the truth about his parents and went back to using his real name.

In those early years as the U.S. Agent, Walker joined up with the West Coast Avengers and may have impressed some of his teammates with his heroics, but also rubbed the others the wrong way with his less-than-diplomatic opinions. Still, he served with the team until its dissolution and eventual transformation into Force Works. It’s interesting to note that, briefly, U.S. Agent teamed up with War Machine and Thunderstrike, thus making a team of heroes clearly based on three of the primary Avengers.

Over the next few years, Walker would deal with some of his issues, change his costume more than once, and almost die once or twice, before becoming a major player during the event known as Maximum Security. The cosmic community had gotten fed up with Earth’s shenanigans and decided to turn the whole planet into a prison for unruly aliens, walling off the entire solar system with an invisible force field for good measure.

Though his methods proved caustic to many of his fellow heroes, John still took charge of the situation and managed to lead the Earth-bound forces against the real villains of the piece: the Kree. He even went toe-to-toe with the much more powerful Ronan to give the others time to build up for the big attack. It might be the kind of story to come about down the line, but something very similar could easily take place in the MCU eventually considering the reputation Earth continues to garner thanks to heroes like Captain Marvel, Star-Lord and the rest.

While still fiercely independent, Walker has sure joined several teams during his time as U.S. Agent. He replaced Captain America in the group calling themselves the New Invaders, which included Namor, Union Jack and Blazing Skull. After that, he supported the Superhero Registration Act during Civil War and signed up with the Canadian-based Omega Flight to stop unregistered heroes trying to flee the United States, among other responsibilities.

During Norman Osborn‘s time of influence, dubbed Dark Reign, U.S. Agent joined the Mighty Avengers alongside Scarlet Witch, Hank Pym, Hercules, Vision and others. While on this squad, the team fought against Osborn and his insane attack against Asgard when it floated about a small town in Oklahoma. During that war, he was nearly killed by a fellow patriotic madman, Nuke, resulting in numerous disabilities, including the loss of an arm and his ability to walk

Not wanting to become a cyborg like Nuke, Walker opted for a prosthetic arm and a wheelchair, but did not give up on his mission to punish the guilty. In fact, he went a step further by becoming the Warden of the Raft, the supervillain prison that also housed the rehabilitation program known as the Thunderbolts. Lead by Luke Cage, this version found the Hero for Hire working with former supervillains in an effort to change them over to superheroes.

Walker once again proved himself a hero when he worked with some of the inmates in the prison to stop a fail-safe that would have vacated all of the oxygen from a particular wing. However, after some of Osborn’s devotees broke him out of the Raft, many wondered about Walker’s ability to warden properly.

Thanks to an accidental trip to another dimension because of the Dark Avengers, though, Walker wound up getting physically rejuvenated which allowed him to return to his life as U.S. Agent. He then worked with the criminals he was stuck with to return 河南福彩app官方下载 where he returned to the superhero life.

Clashing With Another Cap

Walker went back to government work, taking out suspected terrorists with help from the military. He left to work for businessman Paul Keane in hopes of getting body army for his fellow soldiers, but wasn’t exactly thrilled when he found out the specifics of the gig: taking the shield away from Sam Wilson, who was then acting as Captain America. In fact, he only went along with the plan when it seemed like Sam had brutally attacked a group Americops (private police officers that just so happened to work for Keane).

John had the best of intentions, essentially saying that Steve was the only one who could truly be Captain America, but it still lead to a massive fight between them that Wilson wound up winning. After that, U.S. Agent told Steve Rogers that he would keep trying to stop Sam without knowing that this was the version of Cap who had been created by the Red Skull and a living Cosmic Cube that would soon take over the country河南福彩app官方下载 in the name of Hydra. While on the subject of poor decisions on Walker’s part, he also joined up with a group of heroes trying to stop Punisher when he’d taken over a War Machine suit of armor to kill bad guys.

Given all this information, the ways that the Falcon And The Winter Soldier writers could use their version of U.S. Agent seem just about endless. With Steve Rogers no longer wielding the shield, having passed it on to Falcon at the end of Avengers: Endgame, it would surprise no one if the U.S. government wanted their own shield-slinger moving forward, regardless of Steve’s wishes. Walker could easily fit that bill with just a bit of tweaking to his comic history. The powers that be — maybe even Thundberbolt Ross, who seems to keep popping up — might see a shield-sized void that needs filling and who better than a decorated veteran as we’ve seen in those behind-the-scenes shots? Plus, it would be notably topical to play with the idea of a more jingoistic, right-leaning new Captain America, which would certainly garner the attention of the show’s two title heroes while also hearkening back to the comics.

From there, there’s just so much gold to mine with U.S. Agent in play in the MCU moving forward. Is he put on a government-sponsored team trying to carry on the Avengers‘ legacy or even replace them? Is he placed on an existing Avengers team by the government in some way? Could he eventually become the central figure in his own story in something like Maximum Security, which seems all the more likely as human and half-human Earthlings continually meddle in cosmic matters? And, then there’s the possibility of the Thunderbolts getting in on the MCU action. What if he gets involved in that? He could lead the team in the field or in more of a support capacity as he did as warden of the Raft – and don’t forget, the MCU already introduced that prison in Captain America: Civil War.

Need some more connections? We got ’em! Taskmaster, who trained Walker to live up to Captain America’s fighting style, is making his big screen debut in Black Widow! Also, in the comics, the Thunderbolts were started by Helmut Zemo who not only appeared in Captain America: Civil War, but will return in Falcon And The Winter Soldier.

To find out exactly how John “U.S. Agent” Walker gets integrated into the Marvel Cinematic Universe, we’ll all just have to tune in when The Falcon And The Winter Soldier debuts later this year.