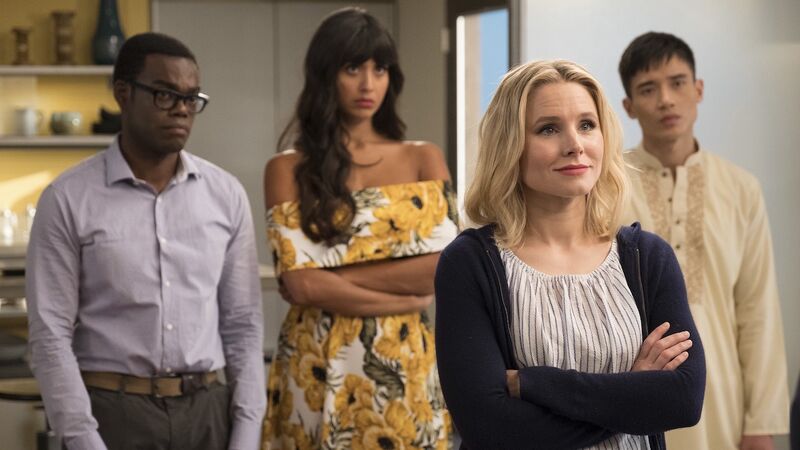 The Personality Theory That Explains ‘The Good Place’

Now, personality theory is a controversial area of research, and we’re not here to either endorse or refute the usefulness of personality tests. (Although with regard to the humors, it’s safe to say that too much blood doesn’t change anyone’s personality.) For fictional characters, however, a personality template can be as real as the writer who created that character wants it to be.

The archetypes allow writers to define each character with a unique perspective on any situation. If you’re looking for it, the four-temperament model shows up all the time in literature, movies, and television. Take the four women on Sex and the City (Carrie is melancholic, Samantha is choleric), the four leads on The Office (Michael is sanguine, Jim is phlegmatic), or the guys in the movie Clerks (Jay is choleric, Silent Bob is phlegmatic). But nowhere is the four-temperament ensemble easier to find on TV right now than in NBC’s The Good Place, which airs its hour-long series finale this Thursday, January 30.

Having died and come to the afterlife in The Good Place, Eleanor, Chidi, Jason, and Tahani each resemble one of these classic archetypes. Their opposing personalities inevitably come into conflict, which we find out at the end of Season 1 that Michael (Ted Danson), the demon architect of a fake heaven, is counting on to torture their souls. But what Michael later discovers — and what writers and philosophers have known for centuries — is that each of these personality types contain subtle elements of the others. The four distinct personalities turn out to be their biggest strength, allowing them to each find a crucial role within the team (despite many, many setbacks) to reach the real Good Place.

On Earth, Eleanor (Kristen Bell) was marred by some of the negative qualities of a typical choleric, like petty grievances (similar to Tahani) and little revenge schemes (akin to Jason). All the way back to the pilot episode, Michael tells the unapologetically selfish Eleanor that her “soulmate” is Chidi, a morally upright professor of ethics. But once Eleanor asks for Chidi’s help to become an ethical person, their shared problem-solving and task-focused traits make them naturally team up together (before it leads into a romantic relationship). Once Jason and Tahani are looped in and throughout the rest of The Good Place’s four-season run, Eleanor is always the leader of the team — another defining choleric trait.

There’s no mistaking Chidi (William Jackson Harper) as an introvert. As he says about his most recent pass through not-The-Good-Place, “my fake heaven was a 600-square-foot apartment that was essentially a bookcase and a toilet, and I loved it.” Melancholics are concerned with morality and compassion, which fits perfectly with Chidi’s career as an ethics professor. It also makes Chidi the team’s moral compass, which of course is essential to their goal of becoming better people and earn their way into the Good Place.

Like Eleanor, Jason (Manny Jacinto) is impulsive and finds himself involved in poorly-thought-out schemes, like the heist where he locked himself in a safe (then suffocated to death). But within the team, Jason is the risk-taker. His outlandish ideas are usually dismissed, but every now and then Eleanor — as a choleric, a more measured risk-taker — is inspired by one of Jason’s suggestions and formulates it into a real plan. Jason’s sanguine impulsiveness can also save the day, like in the season 2 episode “Rhonda, Diana, Jake, and Trent,” when Jason throws a lit Molotov into a cocktail party in Hell.

Tahani (Jameela Jamil) tends to be introverted, but is also people-oriented to a fault. When Tahani was on Earth she rubbed elbows with celebrities, and still can’t stop herself from dropping A-list names in the afterlife. She shares a certain amount of neurotic fixation on codes of behavior with Chidi, but for Tahani that means the intricate social rites of the upper class more than morality. As a member of the team, however, Tahani melancholic personality means she’s the least likely to be overwhelmed or panicked, even when faced with eternal damnation. She keeps the team steady and stable in their most dire moments, allowing everyone to come up with the idea that will keep them out of the Bad Place and get closer to the Good Place.