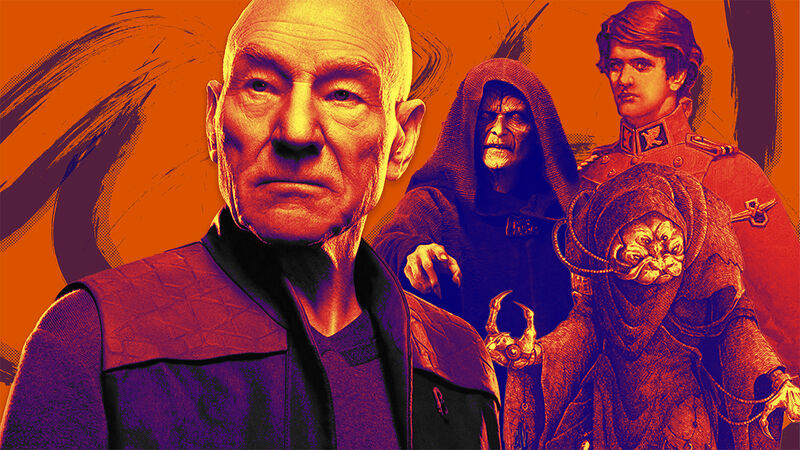 It’s a debate that’s raged for what seems like aeons — but ahead of the premiere of the latest Star Trek series, Picard, now is a good time to take a fresh look at the forces of Star Trek and how they’d fare against those of that other epic space saga, Star Wars. While we’re at it, we’ve also taken the opportunity to compare the Star Trek universe against that of Warhammer 40,000 — because why not? — and the influential Dune, which is getting a Denis Villeneuve-directed big-screen adaptation later this year. But we don’t stop with just the writer’s opinion. These things are nothing if not contentious. Which is why we’ve also consulted munity representative, Mike Delaney — an expert across all four properties — for his valuable insight. To boldly go…

At first glance, this seems like a fairly even match. Both sci-fi franchises depict interstellar civilisations where faster-than-light travel is routine, where myriad alien species live and work together, and where conflicts are, by and large, resolved by spaceships firing powerful beam weapons at each other.

But the devil is in the detail. In Star Wars, ships typically fire lasers. But in Star Trek, ships typically fire phasers – weapons that emit streams of pulsed energy particles. Far more powerful than conventional lasers, ship-mounted phasers are capable of destroying asteroids and laying waste to entire continents.

In comparison, lasers are relatively feeble. In the Star Trek: The Next Generation episode “The Outrageous Okona“, the USS Enterprise-D is struck by ship-mounted lasers that fail to penetrate even the navigational shields of Captain Picard‘s iconic starship. Thus we can see that even with a huge numerical advantage, the forces of Star Wars simply could not survive any engagement with the Federation, the Romulans, or even the Cardassians.

We can foresee only two ways that the fleets of the Galactic Empire could triumph over the forces of Trek. One would be to follow in the footsteps of Vice Admiral Holdo, and to use hyperdrive-equipped ships to simply ram their opponents. The other way would be to convince the commander of the Trek forces to communicate via a video link; as we saw in The Empire Strikes Back, this would allow a suitably ruthless Sith practitioner to simply choke him remotely.

While both Kirk and Picard have demonstrated steely resolve in their many adventures, neither would long resist the pressure of a crushed windpipe. The Trek forces would soon surrender.

Mike says: Star Trek versus Star Wars is a hotly debated topic, with both sides having their good and bad arguments, and counterpoints. The argument presented here is a little too simple, and rooted in information that I’d counter is not entirely accurate. While smaller vessels such as starfighters or armed freighters do mount laser weapons, larger capital warships, such as Star Destroyers, are armed with turbolasers. Turbolasers are more powerful, and are also capable of destroying asteroids in a single shot, as shown in The Empire Strikes Back, as well as destroying the surface of a planet in a tactic known as Base Delta Zero.

Another factor to consider is sheer size and tonnage. A standard Imperial-class Star Destroyer is 1,600 metres in length and mounts at least 120 individual weapon emplacements (generally sixty turbolasers and sixty ion cannons). In comparison, both the Galaxy-class and Sovereign-class only measure up to 641 and 685 meters respectively.

Star Trek ships, in general, are shown to be a lot more maneuverable than the bulkier capital ships of the Star Wars universe. Other technological innovations include transporter technology, and the skill of Federation engineers in adapting technology on the fly to defeat enemies would serve them well in a fight with the Empire.

All of this doesn’t even bring ground forces into the mix. The Empire fields an army of millions of troops, backed by mechanized war 河南福彩app官方下载. In comparison, none of the major ground forces of the Star Trek universe have been shown to employ similar methods. In a stand-up fight, races like the Klingons and Cardassians could match the Empire for military discipline and prowess, but the Federation has always been shown to be outclassed in ground combat operations. Unless the Federation can find a primitive race of teddy bears to deploy as front line troops that is.

There are vast volumes of official lore for Warhammer 40K, but it all boils down to this: “In the grim, dark future of the 41st Millennium, there is only war!” Most settings in speculative fiction depict a future that would be in some way or other cool to live in, but 40K is a nightmare for everyone involved. The Imperium of Man is in a near-constant state of total war with undead robots, intergalactic insect monsters, humanoid fungus creatures, insidious space commies, and literal demons from hell.

The arrayed star fleets of Star Trek would enjoy an initial advantage in terms of efficient chains of command, and technology – Warp Drives do not require ships to travel through a parallel universe filled with supernatural horrors. But in any protracted engagement, the forces of Trek would face insurmountable asymmetrical threats.

The Dark Eldar would launch lightning raids to enslave hapless Federation citizens, vanishing back into the Warp without a trace. Brave Klingon warriors would find their Bat’leths of little use against the claws of the Tyranid Carnifex. Even the wily Ferengi would meet their match if they tried to trade with the treacherous, rat-like Stryxis.

As for the Imperium of Man, a pan-galactic empire spanning millions of worlds, the United Federation of Planets would be perceived as an abomination, seeing as it fully integrates non-Human species (filthy ‘Xenos‘). Even though full mobilisation would take years, the Imperium would ultimately field millions of Space Marines and billions of Imperial Guard, utterly overwhelming all resistance.

If counsellor Deanna Troi were to read the mind of an Adeptus Astartes storming the bridge of the Enterprise, she might get a brief insight into his fanatical obedience to his Emperor before being sliced in two with a chainsword for the unspeakable crime of having a non-human mother.
“Live long and prosper” would be no match for “Exterminatus”. The Imperium may be the human faction in 40K, but they’re not exactly the good guys.

Mike says: In my opinion, this is pretty much spot on here; the entire ideal of the Federation as a United Nations of space is anathema to the ideals of the Imperium of Man. The Federation’s alliance of races would be an immediate target for the Imperium as they sought to cleanse the universe of Xeno filth. They might offer the human race a chance to renounce their alien allies and accept Imperial compliance, but the ideals of the Federation would not allow them to abandon their fellow denizens of the galaxy.

Militarily, the Federation would have no chance against the forces of the Imperium. As noted above, the Federation has consistently been shown to be outclassed in ground combat. This would only be intensified by the condition known as “Transhuman Dread”. Normal humans would literally freeze in fear as their minds rebelled at seeing seven-feet tall armored killing 河南福彩app官方下载 with speed and strength beyond that of a normal person. Warrior cultures like the Klingons and Jem’Hadar might fair better, but the outcome would be inevitable.

Dune is an oddity amongst sci-fi franchises. It depicts a distant future in which advanced computers, AIs, and androids have all been outlawed. Instead, the human race has sought to maximise its effectiveness through selective breeding, meditation, and powerful mind-expanding drugs. A rich or powerful person with access to the Spice Melange can live for centuries, and the galaxy-brained Guild Navigators, who make faster-than-light travel possible, can live for millennia.

In the realm of ship-to-ship combat, it would appear that the vessels fielded by the varied star-faring civilisations of Star Trek would have a tremendous advantage over Guild Heighliners, which are little more than gargantuan tubes used for hauling cargo. In any direct confrontation, the anti-matter explosion created by a single Photon Torpedo would be enough to reduce a Heighliner to space scrap.

But in terms of human potential, the aristocrats of Dune definitely have the edge. Paul Atreides, his son Leto II, and other members of their esteemed bloodline have the gift of Prescience: the ability to see with perfect accuracy events in the future – and the present.

Assuming Paul or Leto II (known to some as the ‘God Emperor’) were leading the myriad forces of Dune in battle, they would have absolute knowledge of all enemy starship locations. They would then be able to make landings on undefended targets with impunity, fielding Sardaukar terror troops, Fremen partisans, and Fish Speaker super-soldiers to kidnap or execute leaders, sabotage key infrastructure, and subjugate civilian populations.

In any scenario where the probability of victory was higher than zero, the forces of Dune would triumph. An implicit axiom of the Star Trek universe is that we should believe in the power of technology. Dune teaches us that it might be more important to believe in ourselves.

Mike says: On the face of it, the areas of engagement would be evenly split. The forces of the Star Trek universe would have the edge in space combat, capable of travelling at faster-than-light speeds with incredible combat capabilities. The Dune forces, despite the capabilities of the Heighliners and the skill of the Navigators, would still need to unload their forces from the massive vessel’s holds before they were capable of attacking.

Conversely, as has been stated above, Federation ground forces are wholly lacking and have been shown time and again to be weaker than those of the Klingons or Cardassians. Against the various forces of the God Emperor, they would again be on the back foot and subject to defeat.

The Prescience of the God Emperor would be a defining factor in any conflict, but the Federation has proven itself to be resourceful time and time again when having to overcome adversity. If Picard managed to reason with Q, and Kirk could literally talk robots into self-destructing, then the possibility exists that the two powers could come to some kind of accord. If all else fails, the Federation could employ time-travel by slingshotting around a sun to counter the powers of the God Emperor. At the very least, this would be a much more even fight.

WINNER: Neither/both (It would be a fairly even fight and they’d probably forge an alliance)

Ultimately, the forces of Star Trek would fail, if push came to shove, against those of Star Wars and Warhammer 40,000 — but with the possibility of forging an alliance with the forces of Dune, there’s hope for the crossover universes yet.