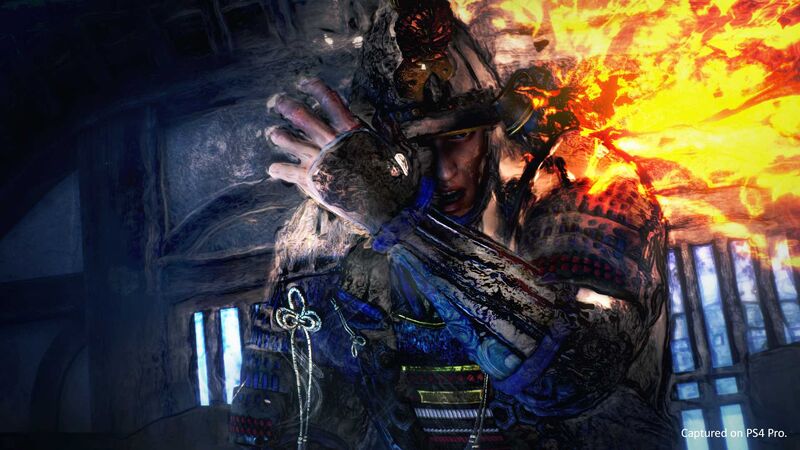 “When we worked on the first Nioh, it was a brand new IP and we weren’t quite sure if people outside of Japan would like the game,” explains Yosuke Hayashi, general producer at Team Ninja.

“But we got so much good feedback from all over, it gave us confidence, it really inspired us to keep going, and we knew we had a great foundation to work on for Nioh 2.”

Hayashi is right. After just three hours with Nioh 2, you can feel how much better it is than its predecessor. It’s harder, it’s meaner, it’s more complicated — and it’ll kill you over and over again if you don’t learn how to respond to the new threats it’s constantly throwing at you.

In other words, it’s unashamedly , Masocore – a relatively new portmanteau of “masochist” and “hardcore” – is the name given to games that feel ‘Souls-like’: action-RPGs that delight in trial and error gameplay, seemingly endless difficulty spikes, and the idea of ‘impossible’ challenges.

To put it simply, they’re games that almost hurt to play — and Nioh 2 is masocore turned up to 11.

For all its similarities to Dark Souls, Team Ninja (who have been making masocore games since the Ninja Gaiden reboot of 2004, lest we forget) reveals that they never initially intended to make a ‘Souls-like’.

With the original Nioh, the studio wanted to craft an experience that perfectly captured the feel of clashing samurai – something that would best illustrate Japan’s iconic Sengoku period through gameplay.

In case you don’t know your Son Goku from your Sengoku, here’s a brief history lesson. The Sengoku period of Japan (also known as the “Age of Warring States”) took place from 1467 to 1615, and is largely defined by the ceaseless war that beset the nation during that time. This setting – filled with social upheaval, widespread war and a ton of clashing samurai –  unsurprisingly, makes for ripe video game fodder.

“We weren’t trying to make a game in this genre to begin with, but when we played the original Dark Souls, we were really inspired,” reveals Hayashi. “Team Ninja is famous for difficult action games, but it wasn’t our primary intention to make a difficult game. It was more about detecting the tension of samurai games — and the genre that worked for that, for us, happened to be masocore.”

“That system, and that way of fighting that we saw in Dark Souls, was perfect for samurai-versus-samurai combat,” Hayashi continues, “and we really liked that that kind of game, in general, has become [so popular across] the world now.”

From Sekiro to Sengoku

Still, while Team Ninja is grateful for Dark Souls bringing attention to the genre it arguably started, the studio was keen to make sure that its’ latest felt noticeably different from its peers: “With Nioh, we think it’s the identity of the game that really stands out, and with the sequel we want to keep Nioh’s art direction and gameplay unique, to make sure [Nioh 2 feels] memorable to players.”

To that end, Team Ninja has made a slight iteration to the overall tone of Nioh 2 compared to its predecessor. In Hayashi’s own words, this game is “Sengoku Yokai masocore” rather than just “Sengoku masocore”, thanks to the fundamental changes to the core mechanics the development team has made… by giving you demon powers.

“We wanted to give the veteran Nioh players fresh gameplay, and we wanted to give them a greater sense of satisfaction in the sequel, too,” explains Hayashi when we ask him why the team layered these new Yokai-fulled powers on top of what was already a fairly complicated combat system.

While adding yet another element could be a disaster, these new demonic abilities work surprisingly well. Unlike its peers, Nioh pairs a variety of equipable weapons with a Stance system: Low, Mid and High stances affect stamina consumption and damage potential, at the cost of speed and maneuverability.

With the sequel, there are a few new things to consider as you engage in the deadly dance with demons and rival samurai throughout this bizarro-world of Sengoku era Japan. A new meter has been added to measure your Yokai powers – killing certain enemies allows you to equip their attacks, hugely changing up certain encounters if you’re smart enough to plan ahead.

On top of that, you also have a Burst Attack that’s designed as a counter or parry mechanic – time if just right and you’ll stagger an opponent immediately, but fluff your timing and you’ll take the full brunt of an enemy’s wrath. It’s risk/reward concentrated – and if you nail it, it’s as satisfying as any Bloodborne countershot or backstrike.

“We didn’t want Nioh 2 to be a direct sequel, where players could predict all the features we’d have in the game because it would be exactly the same as the first game,” Hayashi says. “As a result, in Nioh 2, players that are used to the Nioh systems and used to this mascore gameplay will struggle through the game as much as new players – but in a good way!

“In the first game, you could wait for enemies to come at you,” explains Hayashi, “but now in the sequel you have to be more aggressive and approach the enemies yourself.”

In our three-hour session with a slice of the game’s middle section, we learned this the hard way. Similarly to how Bloodborne rewards players for being offensive, Nioh 2 urges you to come at the enemies and rush them down. Hayashi more or less tells us the whole experience has been designed to bait you – pull you in aggressively, so you can fish for an enemy attack, then counter them before they get a chance to wail on you.

“In Nioh, waiting was a good tactic… in fact it was a recommended tactic!” laughs Hayashi. “This time around, you get to decide whether to counter and play the more aggressive defensive game against your enemies. It’s more of a gamble, in my eyes, because if you get the timing of your counter wrong, or read the enemy incorrectly, you’ll be dead in one second.”

It’s a smart move from Team Ninja. Nioh was a great slice of mascore in its own right, but it was inhibited towards the end of the experience by a lack of enemy types and predictable animations. Nioh 2 throws a slew of new foes into the mix, and even has a few unpredictable animations in there to keep you on your toes. It’s baity, it’s aggressive, and it’s frustrating… but it never crosses the line until it feels unfair. In other words, Team Ninja has the sadism/masochism balance down to an art.

“We have added many, many little tweaks to the overall gameplay experience – how things are balanced, how we time things – but they all add to quite a big change in how the game feels,” explains Hayashi. “Of course, we want you to die over and over again, but we need it to feel right.”

Nioh 2 is a perfect counterbalance to last year’s Sekiro: Shadows Die Twice. From Software’s last game, in some ways, felt like a more stripped back version of the Souls experience – forcing you to rely on your prosthesis and your katana – and it received high praise for simplifying the masocore formula.

Nioh 2 may well go the completely opposite direction – laying stances, weapon types, stamina management, aggression versus defence, Yokai skills, positioning and weapon match-ups with a deft hand – but the result is a masocore game unlike anything we’ve ever played. Deeper and more varied than the original Nioh, and different enough from its peers to really make an impact.

Nioh 2 then, in its own way, charts the evolution of the masocore genre, and makes itself an indispensable purchase in the process.

Dom Peppiatt
KingPepin
After cutting his teeth on magazines at games™, Dom has written for everyone from Xbox Achievements to The Daily Star. Terrible puns. Obsessed with dogs. Somewhere between Squall and Ignis.