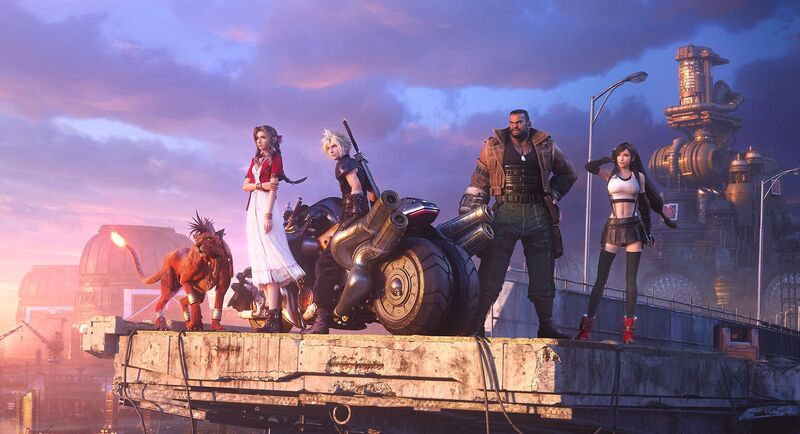 As I push my way through the screaming crowds in Midgar square, the aftermath of the Mako Reactor explosion feels chillingly tangible. Sirens blare relentlessly. Rubble and debris cover the once-bustling streets. But this is no time to be standing around. I shake it off and push forward, passing a crew of Firefighters desperately battling a blaze that engulfs a nearby apartment. Stumbling away from the crumbling city centre, I can’t help but stop and stare as paramedics crowd a woman lying crumpled on the pavement.

The worst thing about all of this? It’s my fault.

While the realisation that your bomb has wreaked far more havoc than you intended is jarring in the 1997 blocky original, it feels downright horrifying in Square Enix’s new reimagining. For the first time playing Final Fantasy VII, I feel genuinely guilty.

Where in the original you get to (quite literally) run from your actions, this newly cinematic retelling lingers on every harrowing detail, forcing the player to face the unintended consequences of Cloud’s latest mission.

Falling in love all over again

It’s this marriage of stunning new tech and more indulgent storytelling that really sum up my time with the long-awaited Final Fantasy VII Remake. Where the blocky original saw players skip from story beat to story beat, Square’s return trip to Midgar truly gives each dramatic moment the space to breathe.

It always felt as though Midgar was a creation too grand to be wasted on such fleeting visits, but now, thanks to the jaw-dropping visual fidelity offered by modern consoles, and the greater run time afforded by its episodic release plan, the Final Fantasy team has no qualms in allowing fans to really soak in every detail of its most beloved creation.

Still, it’s not all old news. As hinted at in the various pre-release trailers, there’s a surprising amount of new content weaved into this retelling, too. In the original, after fleeing the Mako reactor and heading into the sewers, players merely saw the ragtag group of eco-terrorists sprinting in a straight line, spouting out a few lines of hurried dialogue as they escape the explosion they’ve just caused. Now their journey out of the Mako plant takes on a whole new meaning.

This time around, the trip back to Midgar city feels longer and more deliberate. As your posse nervously laugh and joke, the weary journey back lulls the player into a false sense of security, while also allowing each character’s personality and the group’s social dynamic to really shine through.

Giving a voice to the voiceless

Speaking of new characters, there’s one aspect that immediately changes how you relate to FFVII‘s iconic cast — their voices. When exploring Midgar on the PlayStation 1, you had only walls of text and Nobuo Uematsu‘s rousing score to set the atmosphere. This time around, each character is fully voiced.

There is, of course, a risk in suddenly voicing formerly silent characters. Cloud. Tifa. Barret. Such is the iconic nature of these voiceless heroes that, like when reading a good book, most fans probably already have dulcet tones for each of them already reverberating around their head. Yet, 23 years after the release of the original, this unforgettable ragtag group of heroes now finally has the voice cast to match the larger-than-life personas.

The goofy Wedge is brought to life brilliantly by Matt L Jones (better known as Badger from Breaking Bad), the brooding Cloud is voiced by Teen Wolf and Pretty Little Liars actor Cody Christian, and Tifa is played by G.L.O.W.‘s Britt Baron. So far, they seem to do a great job, with each character been given additional lines that really help to flesh out the game’s wider cast.

Making the environments and iconic heroes look better is a given, but opting to take the time to really make them feel more human? That’s the real gift to fans here.

Nowhere is this truer than with the unexpected early appearance of the game’s achingly cool antagonist — Sephiroth. After being haunted by the very real impact of the bomb you planted, our hero finds himself feeling groggy. Flitting through the distraught crowds, Cloud stumbles his way into a side street, finding himself face to face with a sight even more terrifying than the horrors that he’s just unleashed.

While the original saw flashes of the mysterious man permitting your early playthrough, this time around, the sword-wielding psychopath’s role feels far more prominent. Given the new episodic nature (and the inevitable influx of new players it’ll bring), setting up Cloud’s relationship with Sephiroth earlier on  — and in a far clearer way than the original —  is a welcome change.

Taking a turn for the better

When I initially played FFVII’s latest incarnation at E3 2019, there was one aspect that left me feeling slightly concerned — its combat. Although everything looked and felt slick enough, my fear was that — much like FFXV before it — combat would quickly be reduced to little more than a button-mashing bonanza. Thankfully, that fear’s been put to bed.

In the two-and-a-half-hour demo, combat on ‘Normal’ difficulty showed a pleasing amount of depth and challenge — with late foes giving me far more trouble than I would have anticipated.

Cleverly, the new combat has brought with it some interesting new enemy types. Where the original saw you largely facing fairly similar and easy random foes until you made your way to the next main story beat or boss battle, this time around, the basic grunts bouts get shaken up by traps sprung by ‘elites’.

It was refreshing to see that different enemy types actually require different strategies, meaning that there’s far more to think about in battle than fans will be expecting. The difficulty level for mini bosses felt pleasingly challenging, too, pushing you to be at the top of your game, without ever crossing the line and feeling unfair.

Yet the most pleasant surprise here is how the developers have handled controlling your party. While swapping between your group could have been an utter mess, there’s a pleasing cadence to switching characters mid-battle. You can take control of any character during combat, and each feels pleasingly distinctive, with Tifa’s furious flurry of fists a world apart from the weighty swings of Cloud’s buster sword.

Summons are of course, alive and well here, too. This time around, they function as a temporary ally, behaving almost like an MMO pet. Ifrit and co barrage your foes with standard attacks at their own pace, but also have two set abilities that players can trigger at will — as long as you have the AP (Ability Points).

In a nice touch, just before their time is up, each summon goes out with a bang — unleashing a show-stopping attack on any enemies unlucky enough to be in sight.

Picking up the pace

Thanks to the fast-paced nature of each encounter, the rest of the game’s events have been tweaked to match. Sprinting through Midgar’s Mako plant, each clash with security blends seamlessly in with the adventuring beforehand, meaning that the tension built up while attempting to outrun the bomb timer doesn’t diminish in battle — it actually increases.

It helps that you’ve got an amazingly revitalised score egging you on, too. While Nobu Uematsu’s iconic score for the PS1 original had its fair share of memorable melodies, those once compressed bloops and bleeps have been reimagined with high fidelity live instrument recordings. Yet it’s not just the same sounds that’ll be guiding your adventure. Interestingly, the music has been carefully programmed to match the energy of the gameplay at the time, with a dynamic score amping up the ante with each swing of Cloud’s sword.

To cut a long story short — Final Fantasy VII Remake looks to have been very much worth the wait. Thanks to some truly stunning visuals and Square’s newfound flair for the cinematic, Midgar feels like the living breathing city that fans have always wanted it to be.

In fact, such is the scope of the project, that it feels almost unfair to lump this game in with other remakes. In the same way that the likes of Rogue One take an existing bit of lore and tell a new story, somehow, thanks to all the lovingly crafted new moments, FFVII feels less like a step by step retread of an old classic, and more akin to new story told in a beloved world — albeit one with comfortingly familiar beats.

While we’ve only been shown the most linear aspects of the game so far, if the more open components of Final Fantasy VII Remake can match the quality of the game’s first few hours, this will be something rather special indeed.

Tom Regan
Tomregan
Having written for everyone from Trusted Reviews to The Guardian, Tom is a London based writer who can't stop talking about games. Now he's joined the team at FANDOM as gaming editor, we have to constantly remind ourselves that he's not actually Ed Sheeran.