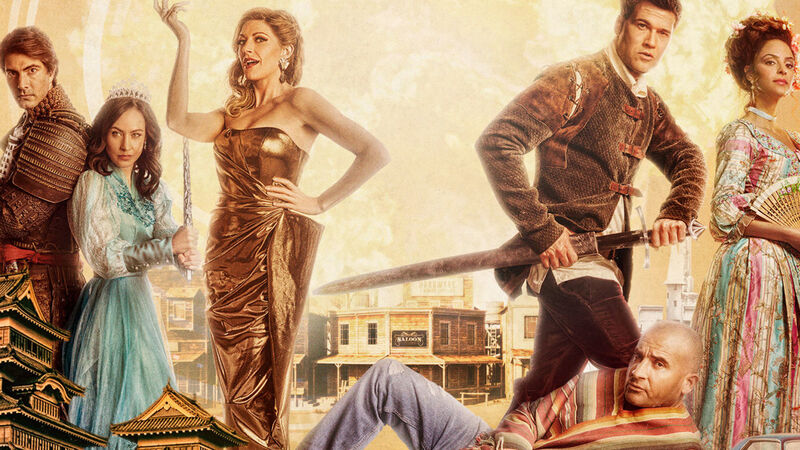 How ‘Legends of Tomorrow’ Decides Where to Travel In Time

What makes DC’s Legends of Tomorrow one of television’s most delightfully weird shows? It starts with the writing, according to co-executive producer Grainne Godfree, talking to Fandom during a recent press event. “I think we’re constantly trying to surprise each other and make each other laugh,” she says. “We never want this to feel routine. We’ve all been on shows where it feels like it’s a similar type of story every episode, and we don’t want that [here].”

For five years now, Legends has been the wackiest member of the Arrowverse family, tracking a crew of misfit heroes traveling through space and time and the great beyond. So far, in its fifth season, the Legends, led by Sara Lance (Caity Lotz), have met Bugsy Siegel and Marie Antoinette, found themselves the subject of a documentary, visited a version of Hell reminiscent of 1980s Wall Street and gotten caught up in a John Hughes/John Carpenter mash-up adventure.

The process of deciding what an episode will be, the producers all say, begins with the characters — specifically, executive producer Keto Shimizu says, “What do we need to accomplish for the characters and their arcs? We always start with the emotional story.”

Back to Reality (Sort Of)

Once the emotional pinpoints are determined, then it becomes time to focus on what time period the show is set in — and, from there, the genres of storytelling that might be invoked are incorporated. “What are the genres that live in this time period really well, either that have been established before, or that we can totally spin on its head and do something totally different and new? That’s when we start going down the rabbit hole of history, and the characters to bring to it,” Shimizu says.

That last thing is increasingly important this year, because after Season 4’s emphasis on fantastical creatures, Season 5 is refocusing on historical figures like Bugsy Siegel and Marie Antoinette (whose souls have recently escaped Hell). ”This is kind of bringing it back to reality-based [characters] again, which I think is really fun,” co-star Maisie Richardson-Sellers says.

Of course, the details of what they’re asked to do on a weekly basis matter. Lotz says that one of her favorite time periods the show has visited was ancient Japan, as seen in the Season 2 episode “Shogun.” Why? ”The wardrobe was so comfortable [Sara largely wore loose traditional dress] and I had to do a lot of sword fighting,” she says.

She says that the writers are always open to suggestions for time periods, and personally she wants to do a trip to the era of Moulin Rouge: “Can-can dancing could be cool.”

While Season 5 is not complete, enough is in place for the producers to be excited about what’s been evolving, especially with one of the show’s biggest developments: A totally new personality for Zari (Tala Ashe), whose backstory was rewritten at the end of Season 4 and is now a Kardashian-esque influencer who has still found herself a passenger aboard the Waverider.

“By the end of the season when you look back, there’s some things where you’re like, we were wildly off, we never got anything close to doing things like that,” executive producer Phil Klemmer says. “Some episodes you just know you’re going to do no matter what — like Marie Antoinette and Zari 2.0 — two influencers of very different ages… I always use the analogy of like an Ouiji board — it’s magic because there’s so many hands guiding the thing around, you don’t know why it’s moving.”

His general hope is that by the end of the season, enough of those elements are woven together in a way so that, he says, “if you rewatch it, you could see the seeds of the finale planted there. Because there’s a real satisfaction when it doesn’t feel like you’re just willy nilly reinventing — that’s the worst thing a show can do is take a right-hand turn.”

The Whiteboard of Secrets

Here is the center of the Legends madness: There is a whiteboard in the writers’ room that never gets erased, that for five seasons now has tracked all of the most insane, wild ideas that the writers have had for the show. “Some of them get checked off throughout the season but a lot of them, they just don’t,” Shimizu says. “Either the stories don’t quite fit or it’s too hard to produce or you know, so yeah, there.”

Keeping this whiteboard alive, on the off chance an old idea might get used down the line, means that proposals (like, say, meeting a very famous British writer) survive from their original inception years ago to today. “When there’s something we really want to do, we will get to it eventually. But sometimes it’s just not the right time,” Shimizu says.

“We always want to simplify — we want there to be more time for characters to be with other characters talking about relatable things,” Klemmer says. “But there are ideas up there that you’re convinced that are so dear that like, if we do this show 10 seasons, we will get to that and one day we’ll cross it off.”

One of those ideas on the board, Klemmer adds, has become the central idea for the show’s recently greenlit sixth season — an idea had been there since the first season. (He wouldn’t specify, of course, what that idea was: “That’s definitely a spoiler.”

Whatever path the show will take, it’ll be totally different from whatever is happening elsewhere in the Arrow-verse. “The other shows have their lane and they’re magnificent lanes. They do their stories with such grace and wonder and awesomeness. But what we get to go all around the different lanes,” Shimizu says. “It’s just so much fun to have a show where anything, literally anything, is possible.”

Legends of Tomorrow airs Tuesdays on the CW.